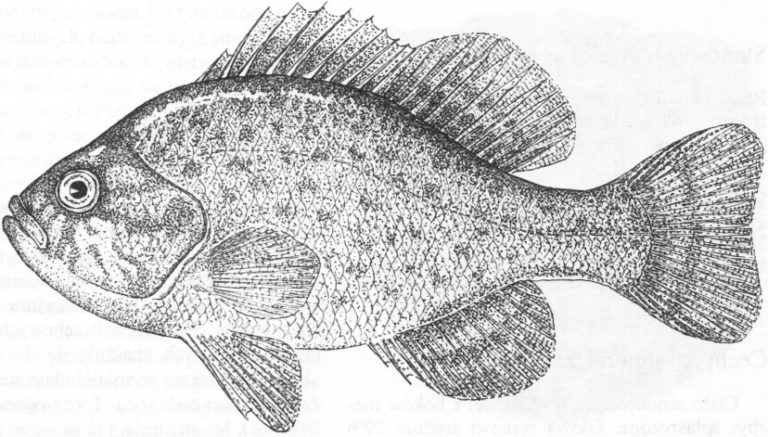 It is a fish native to the North American continent, brought at the end of the last century to France and Germany, from where she got to Yugoslavia. It was dragged into our waters by v 1929 r. on the occasion of the transport of carp fry from Yugoslavia. After the common bass got into our waters, it turned out, that the conditions of Czechoslovakia are unfavorable to him, hence the spread of the species in question, both in terms of the number of occupied positions, as well as the number of individuals, is limited. It lives in medium deep and shallow waters, in cut off oxbow lakes with warmer water and lush vegetation; He avoids flowing waters. It is found sporadically in the Elbe basin; much greater populations are found in the Danube basin, in the canals of southern Slovakia. This fish is beautifully colored, grows up more or less to 10 cm, it has no economic or sporting importance. It is also not used as bait. It does not occur in Poland.

It is rarely found in breeding ponds as an additional fish. It was brought at the end of the last century from America. In ponds it reaches a weight of 0.3-0.5 kg. Currently, it is found less and less in pond farming. Some watercourses and dam reservoirs were stocked with it experimentally. This is probably why it is not included in the natural water catch lists, that anglers mistakenly recognize it as a perch or ruff. However, there are reports by ichthyologists, that these fish, when released into rivers, spread quickly and migrate to estuaries. Its lifestyle is similar to that of a perch, therefore its catch is similar to that of a perch. It has some economic and sporting importance. Successful attempts have been made abroad to restock selected dam reservoirs with this species, Therefore, such experiments should also be carried out with us. The history of bringing the large-mouthed bass to Poland was similar to that described above. Currently, this species is extremely rare in Polish waters. The protective dimension of this fish is 25 cm.