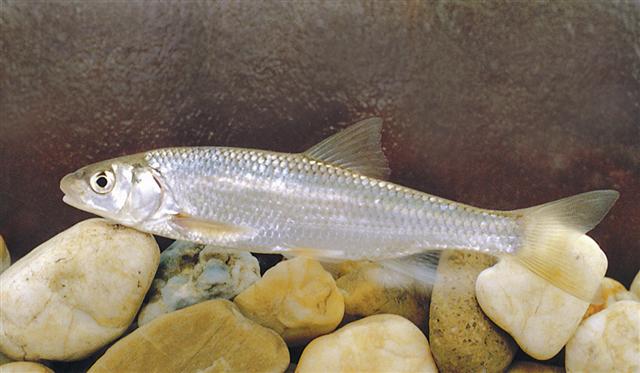 In September, the vast majority of loner anglers will finally find some peace in the waters, when the buzz of a frantic child died down, doggies, daddies, I have, and any other disco polo singers with radios, will go to areas known only to him. Everyone to their refuge.

The fish most often associated with the month of September is the perch, and it is true, is the main trophy so far. But not only. For some, the last minute, the last chance to catch grasshoppers (grasshoppers) handguards, there are warm and sunny days in the beginning of autumn. The image of the handguard is generally known, so it does not need any special introduction. However, because, along with chub and weir, it belongs to one family Cyprinidae and the genus Leuciscus, and it is obviously connected with being together, therefore a few details for a reminder of the differing handguards from chubs.

The mouth of the handguard is small, bottom, horizontal mouth intersection, at the edge of the lower rim of the eye. The chub is larger, oblique cut of the mouth, the highest point at the level of the eye diameter. The eyes of the guard are yellow or pale yellow, the chub is red. Pelvic fins in the crossguard are gray, red or orange chubs.

The above information is important for small copies, when the silhouettes of both fish are visually similar.

Sunny and warm September days are the last moment to meet this stud, nice, a timid fish, unfortunately, as if recently forgotten, even called the poor relative of the "sports" chub, often underestimated by anglers, and certainly by infallible PZW activists, for which it is not even worth the dimension and the grace period! It means: take when you want and as much as you want, Colleagues, companions and companions. However, not for everyone. It is at the end of summer that for some people no 1.

When catching other species can still wait, the crossguard will not wait. Along with colder nights, Only the well-known hiding places will descend with rising water and chill. It will become unavailable.

The method of catching this fish with grasshoppers is painfully simple. Its beauty lies precisely in this simplicity. All you need to do is catch the right supply of horses, otherwise cute critters, which we will no longer find at this time in the tall grasses, and in dried ones, "Burned" by the sun places with high insolation. Having already prepared (no special ritual, as is often the case) bait, when there is something to put on the hook, and it is not just any treat, first class dish, they know about this chub, it also recognized the cross, all that remains is to assemble the match stick (a fly can be very successful). Vein? As thin as possible, but no exaggeration gentlemen, on 0,10 it is great to break a leader on any hook, and Gamakatsu is not cheap… It is enough for me, let's say 0,15. Exactly. Float, I've always fished with a porcupine spike, I do not know others.

It is, moreover, an insignificant element, it will be more important to feel the bites with the fingers of the left hand, maintaining direct contact with the bait through the line. One screen clip clamped approx. 25 cm above the grasshopper, only for this, so that the float does not lie flat in the water.

Ot, and everything. The effectiveness of fishing with such a set, it consists primarily in releasing it as far as possible downstream. It is not enough to cast and wait for bites. The kept grasshopper should penetrate the middle and upper parts of the water – as far away from the angler as possible, even the shallows. When it is clean and crystalline with a sandy base, herds of guards standing under the overhangs of trees and wicker bushes, they can easily see a slowly moving bite.

You don't have to give them near the nose. They will come up on their own. It follows from my observations, these are less distrustful than chubs or graylings and "approach", after all, an unnaturally flowing insect. Bites are manifested by a sudden holding or a sharp pull down the river. Important, so as not to miss this moment and gently trim. If, even in the swift current, we do not notice a sunken float, the bite is easily felt in the fingers. And here's a cautionary tale. A towed crossguard should be pulled away from the herd definitely and quickly. Once scared we will not soon see, so it is not worth waiting for the next bites.

There are places like that, there is such a river, who has been giving me beautiful things for years, as
your kind, because ok. 25-centimeter bolsters. However, every year, as it happens almost everywhere, the herds are heavily thinned by local "sakowców".

But… you can still go out. Sure, that I will not reveal the name of this trail, my selfish nature will not allow me to do so.

The above-mentioned method of catching handguards, it is undoubtedly recommended mainly to young anglers, learning only sophisticated fishing, who like frequent changes of positions, in short, for active anglers. It is a great school of "progórski" craftsmanship, as well as the art of feeling, reflex and camouflage when hunting current-loving fish species. It can also be a kind of "prelude" to engaging in flymaking later.

And the way from a live insect to its artificial imitation is now.