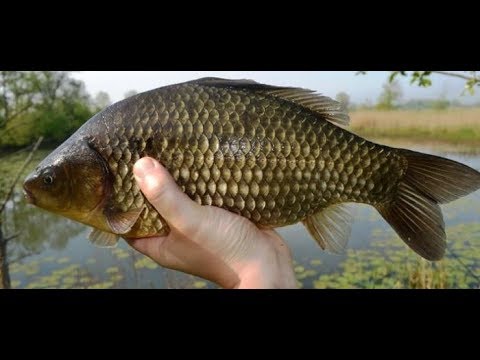 He takes it carefully like a rope, however, during hauling, it fights no worse than a carp. Karaś is not a "carp for the poor" at all, but it is a real challenge for any quiet feeding fisherman.

Summer evening at the peat pond. Damp soil gives off the remnants of the heat accumulated during the day, calamus gives off its characteristic smell around, the rays of the evening sun fall on the cobwebs. The blue dragonfly sat for a moment on the antenna of a light waggler float, to fly away in a moment, as if something had scared her off. The pulse of the focused angler suddenly accelerates – whether the float accidentally moved?

The hunter had almost believed it, that he has visual hallucinations, as the waggler suddenly shuddered, it emerged a few millimeters out of the water and froze. The angler's hand immediately grips the butt of the light brace rod. Was some rope finally interested in the little red worm?? The float almost invisibly moves to the side, it rotates around its axis and disappears majestically under water. The delicate rod leaps upwards with a slight whistle of air, to absorb the powerful jerk in a fraction of a second later. The jam succeeded. The angler forgets about dragonflies and calamus in one second. Now his attention is focused only on the big one, with the determination to fight for a fish's life. At the leader line 0,10 mm each second of distraction may result in the loss of the hauled fish. In the clouds of silt rising from the bottom, the sides of the fish sparkle with golden brown tones. I immediately recognize the way of fighting, that it is not ropes. The fish on the other end of the line fights forcefully and without pardon. So it is a carp? No, it's a crucian, but some crucian! My opponent fights to the very end and even at the very shore, after gasping for air several times, still does not give up. As for anger, the landing net is far out of reach.

Landing with a bear paw

There is nothing else left for me, just a tuck by hand. However, if you want to capture such a wide fish, you'd have to have a bear's paw. In the kneeling position, I use the entire "happiness limit", I finally succeed in this art.
My largest crucian carp in my life lies quietly in the green grass. The fish is almost round and I'm not at all sure, whether it would fit entirely on the plate. Actually, I feel a pity about this crucian, that soon it will be crispy baked in butter. "Rare Prey" or "Luck."” -some readers will comment on my catch. But you can believe me, that crucians are found in our fisheries much more often, than many anglers believe. That's enough, that there is at least one body of water in the area with naturally occurring small crucians. These fish spread thanks to anglers who catch predators (extremely lively small crucians are the favorite live for pike). After you're done fishing, if there are any live fish left in the bucket, the angler usually pours them together with the water into the lake. You can believe me, that in this way crucians found themselves in many water reservoirs, and in some of them they grew to such impressive size, that they are a challenge today for quiet feeding hunters.

Where to look for extremely brave Karasi? Before I answer that question, first, let's take a closer look at this fish. The crucian carp is strongly protruding and has a very "compact" body structure. At the same time, it is relatively short and well-muscled. In large reservoirs, it usually sticks to the border of the reed belt or lives among the soft aquatic vegetation growing by the shore.. The rather slow crucian is relatively safe from pikes there.
The structure of the crucian carp allows it to easily move around even in the largest underwater jungle. After exceeding one kilogram, the crucian is no longer afraid of open water. It often swims together with carp of a similar size and can be caught even at a depth of about two meters.
Fixing, there are crucians in some water reservoir, does not mean at all, that we will be able to catch them right away.
Large crucian carp are extremely cautious fish and rarely go fishing. It is easier to catch a large rope than an experienced one, extremely suspicious crucian.
Taking a large crucian is barely noticeable and extremely timid. You should remember this, that this fish has a relatively small mouth and cannot always cope with too large lures (I mean fine-grained lures).

This creates some kind of problem, because we are even focused on a one-kilo fish, we have to fish with tiny lures, So also for a super-thin line and a small hook. During the haul, the crucian carp shows no sentiment, what he can do. Situation without exit? In fact, yes, although the English also found a way to do so. The best "weapon" for cautious large crucians is a winkelpicker rod with a fine tip.

The ground weight must not be too large (preferably a 5-gram one with a short, straight-through tubing built into it). The set shouldn't even have a carabiner, because, as i said before, large crucian carp are extremely suspicious and sense even the slightest resistance. The diameter of the leader line ranges from 0,12 do 0,16 mm. The length of the leader depends mainly on the preferences of the angler, although it is rather not advisable, that the leader is longer than 50 cm. If at some point, with the tip of the winkel-picker will start to bounce slightly, we can hope, that our lure is what the big crucian is interested in.

Karas can also be successfully fishing with a float. The largest specimens often "sulk" while biting, and the angler's nerves are then put to a very hard test. If someone wants to eliminate the annoying vibrations of the float during a bite at all costs, he should opt for the smallest and slimmest model, which can only be purchased at a tackle shop. And, e.g, before I switched completely to fishing with a quiver tip, I have successfully used it as a regular float, varnished matches. I rubbed the head of the match with grease, so that it can swim better on water. Anglers, who don't mind a bit extravagant way of catching fish, I recommend the "free line" technique. A light fly with a floating cord is best suited for this purpose. The bait is the same as when fishing with a float or a quiver tip. About half a length of two meters mono leader should be sinking. We see bites in the same way, like when fishing for trout, so based on the movement of the rope in the water. Angler, who will master the art of fishing with "free line", he should prepare himself for a wonderful and extremely exciting fishing.

One thought on “Fishing for a crucian carp”