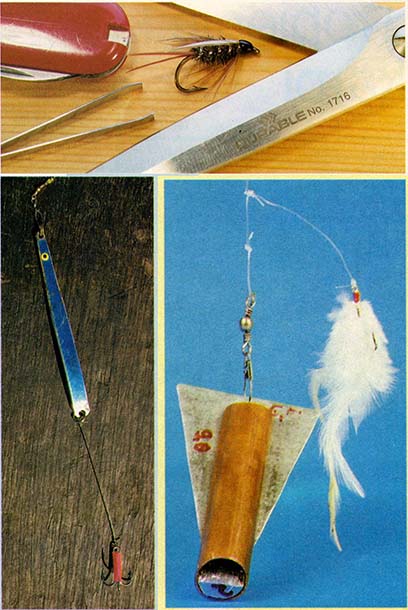 A thick Swiss Army knife-harvester is a great toy for big boys. After all, it is equipped with so many different "tools", which, tell the truth, never or hardly ever used. Because Swiss Army Knives are relatively large and heavy, they end up in a drawer immediately after purchase than in a trouser pocket. Pocket knife, if it's not in your pocket, however, it is rather of little use. Going fishing, after all, no one takes a drawer with him. I personally have three pocket knives. One big, with all "necessary tools" (I hardly ever use it), the second medium-sized – with two blades, ball, cap opener, with a can opener and a corkscrew (i use it quite often) and the third is tiny, almost a miniature of a pocket knife. Although I received the smallest pocket knife as a gift, I am most pleased with it, especially from tiny tweezers, it is equipped with. I always carry this pocketknife in the pocket of my fly tactical vest. With tweezers, I can easily pull out the bow ties even from the smallest compartments of the box, as well as carefully nibbling on an overly spiky hackle, when I want to make a fly a little more "subtle" (I don't have to trim her with scissors). A tiny Swiss Army knife costs pennies and if no one gives it to you as a gift, you can safely afford such an expense. It really pays off.

You know, that the red color has a very provocative effect on many species of fish. Even farmed trout eat much more food, when it is colored red. This is evidenced by the nutritional experiments of many fish farmers.
Cods are definitely the best for red pilkers, Perches like to attack centrifuges with a red wool tassel, bites of salmon are more aggressive, when a decoy made of red pieces of wool is attached to the imitation of rosewood. A liking for red color was also found in garfish.
Seasoned garfish hunters attach a treble to an artificial bait on a 5 cm piece of fishing line (the fish are less likely to become unhooked during the fight). Garfish will take even better, if the red plastic tube is stretched over the anchor shaft.

A weight with a ballast

When fishing, she tracks, mackerel and cod on the paternoster set have noticed a certain pattern. Using weights that fall in the water quite slowly and diagonally, I've always had more strikes, than when fishing with classic pear-shaped sinkers, falling quickly and in a straight line to the bottom. So for some time now I have been fishing only with weights with a tailor-made tail. To make such a sinker, they are needed: a piece of copper tube in diameter 20 mm, three thin nails in length 18 mm and a piece of sheet metal (preferably from the bottom of a 5 liter beer can). I cut the copper tube into pieces of length 95 mm (one end is sawed normally, at right angles, the second at an angle 45 degrees). Then I cut almost the entire length of the tube to the depth 80 mm.
With the sheet metal shears, I cut a length trapezoid from the bottom of the beer can 95 mm (on top 60 mm, at the bottom 20 mm). I make four holes on the central axis of the plate. I am drilling the first hole 5 mm above the base of the trapezoid, the remaining holes at equal intervals along the entire length of the axis and insert nails halfway into them. Then I slide in the tin trapezoid (the thinner end to the front) into the incision in the tube. I pour hot lead over the longer "half" of the tube.
200-gram weight with ballast is soon ready for use. Wanting to get weights of different weights, a different diameter tube must be used, possibly trim it a little shorter or longer.