Salmon are wonderful fish. When they are still quite small, they sail, for example, from Scotland to Greenland, be there for two, three years to hunt, and then, return from Greenland to Scotland as adults, either to Norway or Iceland – it all depends, Where do they come from. Guided by the instinct of extending the species, salmon always spawn in rivers, in which they were born.
Salmon do not feed in freshwater. If only thousands of spawning salmonids were still hunting, their prey would have to forfeit also the juveniles of their own kind still residing in the river. Mother nature preferred to avoid it. Therefore, catching salmon in the river is also very difficult. Back from the water with a stick, It is perfectly normal to take an unused pick or lose a salmon while hauling. For a fly fisherman, however, the most difficult thing is to get rid of the reflex of immediate jamming immediately after taking the fly..
A quick jam is a big mistake, as taking salmon takes some time. After a while, almost every fish will jam by itself. For this reason, many fly fishermen haul half a meter from the reel, and sometimes even a meter of rope and presses it under his index finger against the handle of the rod. They release a loop at the moment of a bite, thus they give the fish some time and only then tighten the line.
Proven method, although it requires the angler to keep his nerves in check. This technique can also be used when fishing for trout in the river with a streamer or a large wet fly.
The fish is jammed only after "returning the loop". Most trout hook up right at the corner of their mouth. The hook will stick very firmly, However, there are no problems with unhooking the fish.

Against the background of the cover

Sometimes the vibration of the bite tip is very difficult to see. The lack of a benchmark makes, that the hunter does not notice many bites. Therefore, fishing tackle manufacturers offer special discs
which is positioned behind the tip.
However, it can be done much easier. Our photographer Heinz used an ordinary tip as the background for the quiver tip, Bucket lid slightly raised. He positioned the tip of the rod this way, that it was just below the notch in the center of the cap (picture). Any movement of the tip up or down is clearly visible. Besides, on a single-color background, the tip is more visible. 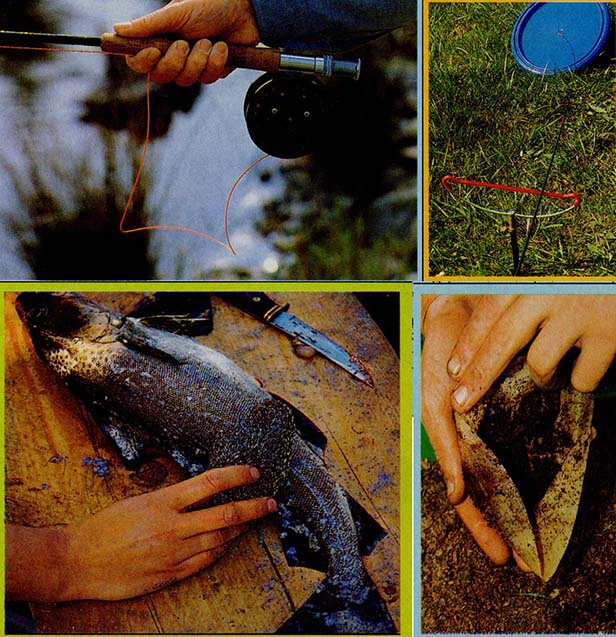 The cod straight from the pan tastes great. Earlier, however, it should be scraped and rarely any angler "likes" this activity. Scraping with a knife is very hard work. However, if we reach for an ordinary steel wire (for washing burnt pots), even scraping becomes child's play. Pull the tightly pressed wire "scraper" from the tail to the head of the fish, and the small scales come out smoothly from the skin. In this way, we can also scrape other species of fish, for example pike or trout.
However, please pay attention, so as not to accidentally buy a wire sponge soaked in washing-up liquid, because then, even the best-scraped fish gets in everyone's throat at once.

Coffee puts you on your feet

I was going fishing in the mountains. – Take worms with you, because there you will have trouble getting any natural bait – a colleague advised me.
Good point. Covered with a thick layer of moss, the grubs caught earlier in the garden went with me to the mountains. After a few days, however, they did not look very good anymore. Old soil and drying moss turned out to be not a very good substrate for longer storage of grubs. No fish will be tempted by such a bait. What to do? I used to read, that coffee grounds can wake up even the most clapped worms and red worms. But is it true? To be honest, Until that trip to the mountains, I didn't really believe it.
However, I decided to try. So the daily ration of coffee grounds ended up in a bucket of worms, while I was wondering, if I am doing right. In the mountains, getting any natural bait actually turned out to be impossible… It worked and how! After just two days, the contents of the bucket revived beyond recognition; the clapped worms grew vigorous, as if I just caught them. Further "feeding” brought further improvement – each time the bucket was opened, the grubs crawled briskly on top of the moss, they reacted with instant backsliding to each more violent movement, and they writhed so “appetizingly” on the hook”, that if I was a fish, I would take it right away. It turns out. that the daily "jackdaw" is just that, and caffeine not only puts people on their feet…