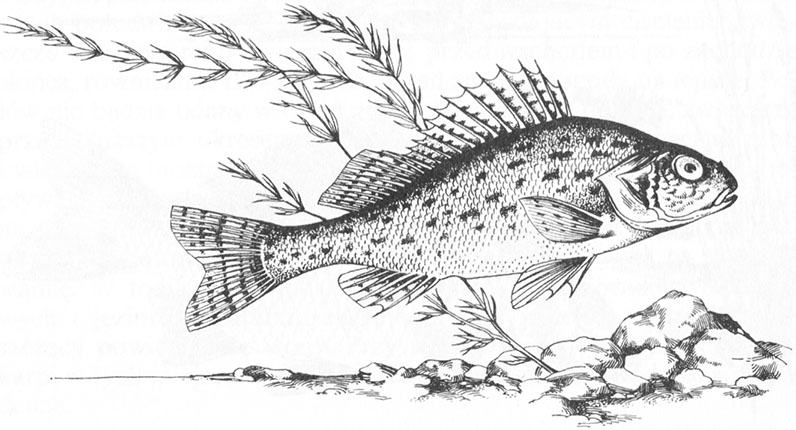 Ruffe occurs only in some areas. It is definitely a deep-sea fish, found in warmer and calmly flowing waters, in dam reservoirs. In Poland, it is massively found in many lakes, especially the whitefish and bream type. It lives in deeper places, in rivers - above weirs, in the lateral sinuses and cavities, at the bottom of a hard-bottomed oxbow lake, gravel-sand or sandy.

From spring to autumn, exceptionally at the end of winter, occasionally on cloudy days. In the evening gray light, the bites stop.

Felt fishing rod, line 0.15-0.20 mm, hook 6 — 8 (smaller ones cannot be used, for it would be difficult to get them out of the fish's mouth), light float, load depending on the depth of the water and the speed of its flow.

For a baited flow at the bottom or for a starter with a load and a float.

He lives in herds, he is very voracious, careless, not very skittish, grabs the bait firmly. Jam immediately, because it quickly swallows the bait along with the hook. Because it doesn't get bigger (only 10-15 cm), eats the bait while catching other species of fish, which is why it is not liked by anglers. It is an excellent eel bait, zander, pike, catfish and large perch. The hard rays of the dorsal fin should not be clipped. It does not hunt other fish, though there is information, that it eats the eggs and broods of other species of fish. The meat is very tasty; ruffe soup is a real delicacy. Good for beginner anglers, because they can train jamming on it. If we are annoyed by frequent ruffles, move to another fishery. In Poland, ruffe is not protected and its catch is not limited in number.

Occurs sporadically in the Danube basin and its Slovak tributaries. It is not a predator. It has no economic or sports importance. It does not occur in Poland.